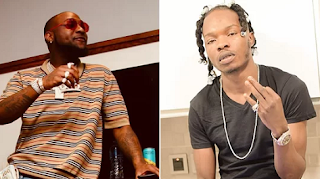 Davido has queried Naira Marley on the authenticity of his songs, saying he does jazz to promote his songs.
According to the DMW boss, all Naira Marley’s songs are sweet prompting him to use the word — jazz.
The soapy crooner had announced he would be releasing a new song today, 30th of January, which Davido reacted to. Naira

was however fast to also reply him saying it will be a 30bg party, lol.
Davido’s reaction: Una dey do Jazz j i swear, All songs sweet”.
Naira replies: ”party time, 30bg”