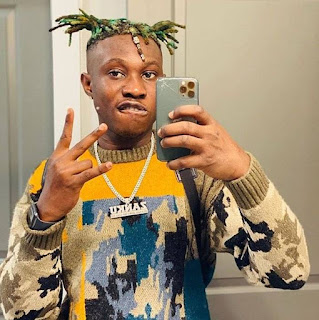 Nigerian Yoruba Rapper, Omoniyi Temitayo Raphael Popularly Address as Zlatan- ibile went up to the class of fame after Releasing his Song titled “Jogor” featuring popular Music artist, Naira Marley and Lil kesh after which he had a collaboration with Chinko Ekun and Lil Kesh on the hit single Able God.
Fans have always Put up Questions on the reason why he always like saying “Kapaichumarimarichupaco” in all his song and songs featured in.
He replied the Question saying that the slag came up after he won Airtel Sponsorship and since then he like saying the word.
Omoniyi Temidayo Raphael, known professionally as Zlatan, is a Nigerian singer, songwriter and dancer. In 2014, he won the Airtel-sponsored One Mic talent show held in Abeokuta, Ogun State. Towards the end of 2018, Zlatan released a single titled “Zanku”, with a new dance routine of the same name.