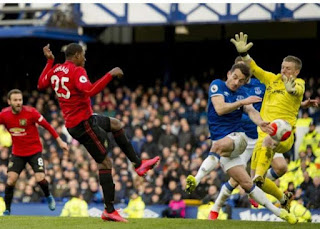 Manchester United manager Ole Gunnar Solskjaer believed his side deserves to pick the maximum points against Everton on Sunday.

The Red Devils rallied back into the game thanks to goal from Bruno Fernandes which cancelled out Dominic Calvert Lewin’s opener at the Goodison park.

United almost won the game at the death, but Everton goalie Jordan Pickford pulled off a great save to deny Odion Ighalo from close range.

Solskjaer, however, believed his side should have won the game with the few chances that came their way.

“It was a game of two halves – first half, we were excellent. But a very strange start, you shouldn’t be 1-0 down like that. After that we played fantastic football and we should have been leading at half time, we could have won it at the end.

“We defended all second half and pleased with a point. One point each is what both teams deserve we had the first half and they had the second.” Solskjaer told the media.