Nigerian rapper Olarenwaju Ogunmefun who is better known as Vector is having a serious downtime over his struggling music career and now he has confirmed it to his fans that his career as a musician is on the path to death.
Vector made this known on Twitter in a response to the tweet published by one of his fans.
The fan had compared Vector to Erriga on Twitter, wondering why Vector’s official Twitter account isn’t verified meanwhile Erigga has a verification badge on his own Twitter page:
See the conversation below: 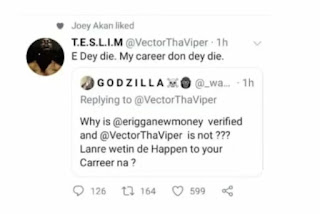