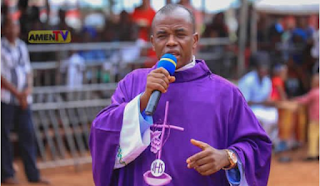 As the #EndSARS protest continues nationwide, so too are rumours and misinformation about the issue, this time in relation Ejike Mbaka, a prominent in Enugu state.

A viral video claims that the prayer ground of the Adoration Ministry Enugu Nigeria (AMEN), which was founded by Mbaka, has been set ablaze. But this is not true. 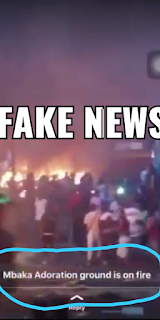 Although TheCable findings show the video was shot in the state, it is from a fire incident at the Enugu north local government headquarters.

Mbaka has been in the limelight amid the ongoing nationwide #EndSARS protest against police brutality in Nigeria.

The priest has been called out for endorsing President Muhammadu Buhari – who is accused of failure of leadership in managing the crisis that has trailed the protests – in the build-up of the 2019 elections.

Amid the criticisms against him, a video emerged online with the caption, ‘Mbaka adoration ground is on fire.’

The video has been widely reported and viewed thousands of times across various social media platforms including here, here and here.

One of such posts archived here reads: “Fr. Mbaka Adoration Ministry Enugu set on fire by angry Nigerian youths. Things are really happening and politicians are on hiding. But Aluta Continua we have no option. Freedom is coming. #EndSARS.”

However, when TheCable ran a google reverse image search of the thumbnail images from the clip, it showed pictures similar to that of Enugu north LGA headquarters located at 45 Okpara Ave, GRA.

A street view of the location also captures a nearby building and the road leading to the headquarters.

Moreover, the AMEN prayer ground where Mbaka frequently holds church programmes and located at Umu Chigbo, Emene, is a large expanse of land unlike the scene captured in the video.

A modified search on Youtube also traced an original version of the video here where it was uploaded on Thursday by EVideos TV.

In the clip, the person recording it is heard repeatedly saying, “Enugu north is on fire. Who say people no go protest,” suggesting it was a recent event that took place amid the #EndSARS protests.