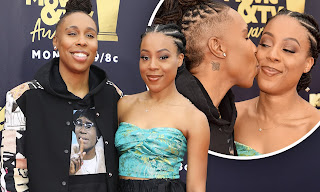 American actress, Lena Waithe’s wife Alana Mayo has filed for divorce, just one year after they tied the knot at a San Francisco courthouse.

Back in January, the Emmy winner announced that they had separated, two months after their marriage was announced on The Ellen DeGeneres Show.

In a joint statement released by the estranged couple at that time through USA Today, they said: ‘After careful thought and consideration, we have decided to part ways. We have nothing but support for one another and ask that you respect our privacy during this time.’

Since they announced their split, there have been rumors that Waithe was unfaithful in the union and was buying expensive gifts for other women.

Waithe, 36, and Mayo, 35, had been together for over three years, and they got engaged in Tokyo on Thanksgiving Day, 2017.

According to court records obtained by The Blast, earlier this week, Alana filed a petition for divorce in Los Angeles Superior Court.