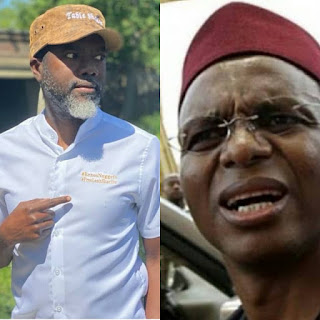 Reno Omokri has reacted to the recent demolition of a restaurant by the Kaduna state government over plans of some Nigerians to hold a sex party in it.

The state police command last week arrested the organizers of the sex party while the state government demolished the building housing the restaurant.

”If sex parties should lead to demolishing, then Nasir @nelrufai ’s son’s house should be the first to be demolished. We all saw when the young man threatened to gang rape an Igbo man’s mother, and even worse, to pass her around to his friends. That is even worse than a sex party. That is a rape party. Hypocrisy! Demolishing the alleged ‘sex party’ hotel just shows total absence of the rule of law in Kaduna. Not that I support sex party (God forbid), but even if it is true (it is not true), is sex party illegal in Nigeria? The same country where a serving Senator married a 13 year old and another slapped a woman while purchasing sex toys? 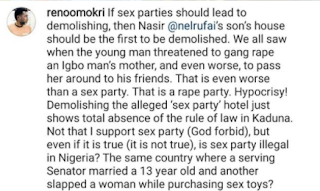