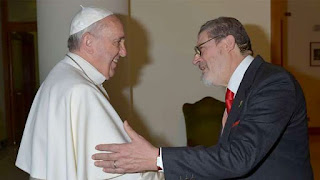 Fabrizio Soccorsi, the personal doctor of Pope Francis has died from COVID-19 complications.
Catholic News Agency reported that the 78-year-old physician was admitted to Rome’s Gemelli Hospital for a previous health issue on December 26.  While he was dealing with an “oncological pathology,” COVID was the cause of death, the Vatican’s newspaper L’Osservatore Romano reported.
In August 2015, Pope Francis named him his personal physician after not renewing the term of papal doctor Patrizio Polisca, who was also head of the Vatican’s healthcare services.
Since the pontificate of St. Pope John Paul II, the two positions had been tied together, but Pope Francis diverged from this custom by choosing Soccorsi, a doctor from outside the Vatican.
The Pope recently declared it was within Catholic doctrine, and actually an ethical obligation, to receive vaccination against COVID and said he would be receiving his first dose shortly.
“It is morally acceptable to receive Covid-19 vaccines that have used cell lines from aborted fetuses in their research and production process,” the Vatican’s Congregation for the Doctrine of the Faith said in a statement approved by Francis in December.