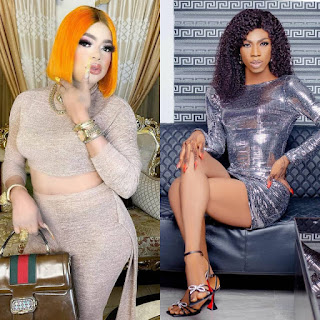 All appears not to be well in the Nigerian crossdressing scene as popular crossdressers, Bobrisky and James Brown aka ”They didn’t caught me”, are at loggerheads.
It all started this evening when James shared a video accusing Bobrisky of threatening to kill him. According to James, he received a call from his ‘senior,’ Bobrisky this afternoon, accusing him of copying his content as a crossdresser. He alleged that Bobrisky thereafter threatened to kill him and gave him a stern warning to desist from copying his content on Instagram.
He said he isn’t surprised at Bobrisky’s action because he knows some seniors never want to see their juniors shine.
He then said he cross-dresses just for fun only on IG but dresses as a man while going out so ”Uncle Bob” shouldn’t see him as a threat.
Bobrisky is yet to react.
Watch the video James Brown shared below