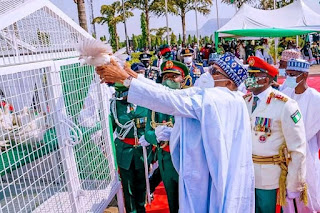 I heard that President “Baba Go Slow” Muhammadu Buhari threw some pigeons into the air, at the Armed Forces Remembrance Day ceremony, and they refused to fly despite multiple attempts by the President. LMAO
That is a BAD OMEN. Pray for Nigeria.
What does it mean to release Doves into the air on Armed Forces Remembrance Day?
The ritual of releasing doves/pigeons on Armed Forces Remembrance Day, is to commemorate the life of departed loved ones and it also signifies love and peace. Do we have LOVE & PEACE in Nigeria? Hell No! Every seconds trouble, death here and there, suffering, weeping and gnashing of teeth all over the nation. So how on Earth do you expect the poor innocent pigeons to fly?
According to eyewitnesses, the President “Baba Go Slow” Muhammadu Buhari got tired of trying to force the pigeons to fly, he left the birds and returned to his seat. The moment he left, some of birds flew immediately. What does that mean? Be the judge.
That reminds me. In 2014, same thing occurred, the doves refused to fly when former President Goodluck Jonathan threw them into the air. Political pastor of the Adoration Ministry Enugu, Rev Fr. Ejike Mbaka, described the incident as a sign that God had abandoned Jonathan. Does it mean God have abandon Buhari as well? Mbaka where are you now?
God will judge each and every one of you that forced Buhari on us twice. AMEN!
What Does It Mean When Doves/Pigeons Refuses To Fly On Armed Forces Remembrance Day In Nigeria?
Let’s hear from you all.
Drop your comment below