Ghanian dancehall sensation, Shatta Wale has made certain statements about Burna Boy that spell the brewing of war between him and the Nigerian megastar. 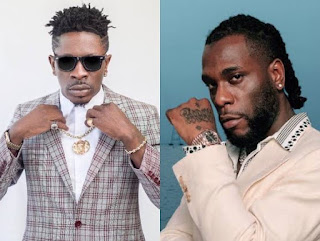 Shatta Wale who is known to vocalise his opinions regardless of how they may be received, created a post on Instagram story on the 16th of January where he said; “About to go live and show Burna Boy how pussy he is just going around telling people I did something to him and the motherfucker can’t even approach me as a real G !! Nigga forget so soon who held him down in Ghana when he had that Eko hotel police case abi.. #Ungratefulpeople” 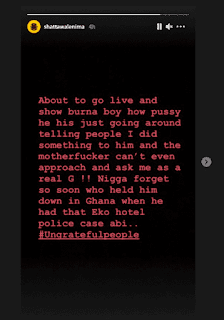 Shatta did deliver on his words and promptly did an Instagram live where he went on a rant saying if he and Burna had problems, he should have called him up to let him know. He also referenced himself as being an omnipresent presence like MTN and had ears everywhere so he was privy to words Burna Boy was saying about him.

Shatta Wale ended the rant by telling Burna Boy he needed help saying; “You need help, I’m saying this out of love my nigga and if you don’t understand, then you’s a pussy my nigga. Cause this life we dey live it’s the realest life… I’m fucking living my realest life we don’t fake, when we have it we have it and when we don’t have, we don’t have.”

Burna Boy had an encounter with the police in 2017 following the scandal where he was accused of sending robbers to singer, Mr 2Kay in Eko Hotels and Suites on Victoria Island.