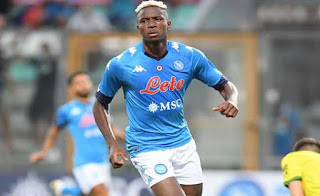 Victor Osimhen’s big-money move to Napoli from Lille has been listed among the top 10 transfers in 2020 by the world football governing body, FIFA.
Recall the Nigerian striker, 22, became Nigeria’s most expensive player after signing a five-year deal worth €50 million (£45m/$59m) in July 2020.
In its Global Transfer Market Report, world football’s governing body said that the total amount spent on transfer fees of $5.63 billion was down by $1.7 billion on 2019, a fall of nearly a quarter to the lowest cumulative amount since 2016.
It was revealed in the report that English clubs spent by far the most, with transfer fees totalling some $1.63 billion, followed by Italian clubs who spent a combined $731.5 million on international moves. Spanish clubs received the most with $785.7 million.
Without giving a specific figure, FIFA said that Chelsea spent the most of any club in Europe ahead of Manchester United and Manchester City, followed by Barcelona, Juventus and Leeds United.
Meanwhile, Manchester City reported the most outgoing transfers of any club, with 45, two more than Croatian champions Dinamo Zagreb and Watford.
FIFA registered a total of 17,077 international transfers, compared to 18,047 in 2019 and the first decline from year to year since 2010.
There were still more transfers than in all of 2018, but FIFA said “the downward trend is clearly due to the effects of the Covid-19 pandemic.”
The report lists the top 10 transfers in the men’s game, with Kai Havertz’s move from Bayer Leverkusen to Chelsea featuring prominently alongside the likes of Arthur Melo’s transfer from Barcelona to Juventus, Victor Osimhen going from Lille to Napoli, Bruno Fernandes joining Manchester United from Sporting Lisbon and Ruben Dias leaving Benfica for Manchester City.