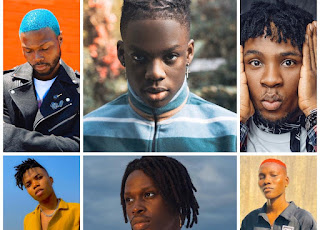 In a shorter note, Nigeria Music Industry is the Biggest and the most successful in Africa whilst Nollywood is also the Biggest and the Most Successful Movie Industry in Africa as well; this is something to be happy and proud about our entertainment industry.
Then on the International Scene Nigeria can be seen making waves on the international level with collaborations which included but not limited to Davido, Dj spinall, Patoranking, Wizkid, Sheyi Shay, Maleek Berry, Mr Eazi, Burna Boy etc. It can further be agreed that Nigerian Musical Acts has the most Popular International Collaborations in Africa.
Now with the above being said let get to the main gist for the day on the
Music Albums that gave us happy moments in 2020. It can be said that Africans are very strong and actually the most strongest continent in the world because amidst the issue of the Coronavirus cases on the rise, Africa hasn’t really recorded a high number of coronavirus deaths like other European and American Nations like the USA which has the highest number of coronavirus case of more than 10 million followed by india with 6 million case followed by Brazil and then France, Russia, Spain, Argentina, etc. The mostly affected countries are white dominated countries so this has left us with the notion that Blacks and Africa at large are doing well in the fight against the deadly virus.
Therefore, amidst the pandemic and the daily high number of cases on the rise, Nigerian Musicians are still keeping relevance by releasing singles and not just that, quite a number of Nigerian musicians have successfully released mind-blowing albums that are shaking the music industry and making waves till this very moment and thus has bring us to the topic, Music Albums that gave us happy moments in 2020; which are but not limited to:
1- Twice as Tall Album by Burna Boy – This Earth Shaking Album was released on the 14 of august 2020, the album which has the highest african music stream on the weekend of its release on the Apple Music features quite a number of international acts like Chris Martin, Stormzy, Sauti Sol, Yossou N’dour and Naughty By Nature, Twice as Tall is said to be Burna Boy’s Third Album Released since he became an international act, The album has 15 songs in total produced by Timbaland, Leriq, Diddy, Telz, Rexxie etc and of cause not everybody likes the album as it has generate some negative reviews on Twitter which we all know is one of the biggest Social media out there amongst others, In every corner of the entertainment industry comes the spoilers who are known to give negative reviews on both music and movies, they are basically everywhere and of cause some of them are being paid to make negative reviews, maybe in my next article i will be writing on how to make money online as a review expert.

2- A Better Time Album by Davido – Now currently trending in Nigeria both home and abroad is A Better time album released by davido on the 13th of November 2020, after its release which was around 12am midnight, the album became the most streamed on Audio Mack with over fifteen million streams in less than one hour and now currently the same album is topping Apples Music top chart followed by Wizkid latest album on the second position then olamide’s on the third.
Davido has yet proven to all that he is the greatest musician in Nigeria, I mean this statement of his has sparked hateful words from popular Nigerian musicians which we won’t like to be mentioned. Davido’s A Better Time Album has some International and home breed musicians featured and some of them are Mayorkun, Nicki Minaj, Nas, Young Thug, Tiwa Savage, Mayorkun, Hit-Boy, Lil Baby and others. A Better Time is currently the most trending album in Nigeria at the moment so don’t forget to buy your copy.
3- Afro Pop Vol. 1 Album by Adekunle Gold – The Love crooner Adekunle Gold Album is another Successful and well celebrated album out there. The 10 music tracks in the album also contained some of his previously released singles like Something different and AG Baby. Adekunle Gold has released a total number of 5 albums starting from 2016 which are Gold Album in 2016, Tribal Sonic Soundblast Album in 2017, About 30 Album in 2018, Urban Heartbeat Album in 2019 and Finally and Currently the Afro Pop Vol. 1 Album of 2020.
4- Get Layd EP by Omah lay – The Get Layd EP by Omah Lay was Released in May 22 2020 Contained 5 Tracks namely Damn, Lo Lo , You , Bad Influence and Ye Ye Ye, Omah Lay who is a Fast Rising Act has fought to remain on the LimeLight after his first debut earlier 2020 after his first single “You” gained prominence and wide range of listeners, he is another who is worth listening to.

5- Rema Compilation Album by Rema – Rema Another Fast Rising Artist Just Like Omah Lay is constantly being on the Top Chart of the Top Nigerian Musicians List with his first hit song titled IRON MAN which was released in 2019, the same song also appeared on Barack Obama’s 2019 PlayList, But then it would be noted that Rema is top ahead of Omah Lay in Every way known and the both can’t be compared, and recently the Almighty Tiwa Savage also claimed that Rema Benefited from her exit from the Mavin Records, she said this in an interview with media personality Ebuka Obi-Uchendu, but i personally found that disgusting because whether she exit from Mavin or not the little rema would have rose to stardom because he’s got talent and he is gifted. Rema has made a name for himself already.
6- Boo Of The Booless Album by Chike – This Album which contains 14 Track Songs was released on 14 of february 2020, and some of the songs in the album are Beautiful People, Nakupenda, If You No Love, Forever, Amen, Roju, Finders Keepers, Insecure, Out of Love, Forgive, Faithful, Running, Soldier, Watching over Me. Chike rose to Fame through the Project Fame West Africa and Voice of Nigeria by appearing on Africa Magic telenovela “Battleground”.
That’s all we have for you on the Music Albums that Gave Us Happy Moments in 2020, if you have any album you might want us to add, please feel free to use the comment section.