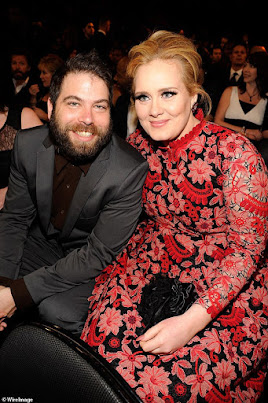 British singer, Adele has reached a divorce settlement with her ex-husband Simon Konecki two years after they announced their separation.
According to Us Weekly, the singer, 32, and the CEO of charity of Drop4Drop, 46, filed the terms of their divorce settlement with the court on Friday, January 15.
The pair reportedly opted to use mediation to work out the details of how their properties and debts would be split up.
Before now, Adele and Simon had finished their work to finalize the divorce but were waiting for the judge to sign off on the paperwork to officially end their marriage.
The estranged couple announced they were going their separate ways in April 2019, with Adele filing court documents five months later, citing irreconcilable differences as the reason for their split.
Adele’s representative said in a statement in April 2019: ‘Adele and her partner have separated. They are committed to raising their son together lovingly. As always they ask for privacy. There will be no further comment.’
In April last year, Adele’s request to keep the details of her £140million ($171 million) divorce private was granted by a court in Los Angeles.
The pair will share custody of their son Angelo, but ‘financial, sales or other confidential business information’ regarding the proceedings will not be made public.
A source told The Sun at the time: ‘Hollywood divorces can drag on for years and become extremely ugly. Adele and Simon clearly don’t want that.
‘They are both committed to keeping the details as private as possible for the sake of their son. They are trying to work out their issues.
‘She talks about [2019] as a very difficult year, and she’s said in the past that creating new music is almost like therapy. You can tell that she is ready to share with her fans.’
Adele began dating Simon in 2011, and in October 2012 they welcomed their son Angelo Adkins, now eight years old, before later marrying in secret in 2016.