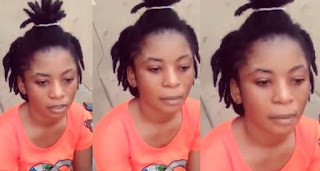 A 20-year-old lady in Owo, Ondo state, has accused her father of having sexual relations with her.

The lady, Fatima Usman in a viral video, gave her father’s name as Usman Momoh Sani, a worker in a tertiary institution in the state.

Fatima alleged that her father had been sleeping with her for long even while her mother was at home.

She said in part;

” Whenever I refused to have sex with my father he would send me out of the house in the midnight.

” My father has been sleeping with me for a very long, and whenever I refused he would send me out of the room.

” If I say I will voice out, he would be threatening to kill me. “He would bring out a knife and show me that if I tell anybody he would kill me.”

” My mother did not bother to check on me whether I slept in the room or not.”