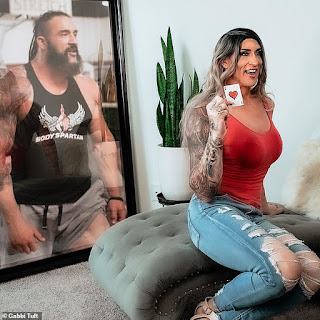 Former WWE wrestler Gabbi Tuft has come out as a transgender woman.
The 42-year-old fitness guru, who wrestled under the ring name Tyler Reks, shared the news via a press release on Thursday, describing the journey as a ‘thrilling story of gender transitioning.’
‘Gabbi is about to share her thrilling story of gender transitioning from a former WWE Superstar, Body Builder, Fitness Guru, Motivational Speaker and Motorcycle Racer to a fun loving and fabulous female,’ the release read. 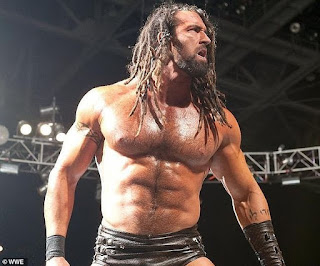 ‘She has been finally set free and ready to rule her world.’
The release continues, saying: ‘Despite his successes during and after his WWE career, Gabe was still wrestling with a secret persona dwelling deep within him. This is a persona he has been hiding in the loud silence of his soul since childhood,” the release continues.
‘Finally, with the blessing of his loving wife Priscilla, Gabe is ready to reveal who he really is. “He” is now known as “She”: A beautiful, wise, witty and wonderful woman called “Gabbi.””
‘This is a story that wrestling and other sports fans, friends and followers must not miss, especially many in the LGBTQ community dealing with challenging transgender issues, who Gabbi and [wife] Priscilla are willing to help,’ the release goes on. 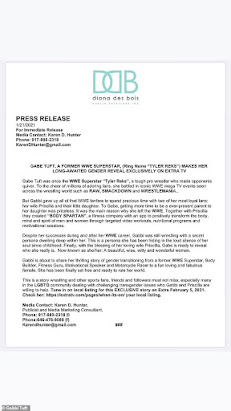 She also took to Instagram to address her new identity in a lengthy post.
Sharing a photo of her new look while posing in front of an old wrestling photo, the former wrestler wrote:
“The ball dropped early today as this is now worldwide news. This is me. Unashamed, unabashedly me. This is the side of me that has hidden in the shadows, afraid and fearful of what the world would think; afraid of what my family, friends, and followers would say or do.”
“I am no longer afraid and I am no longer fearful. I can now say with confidence, that I love myself for WHO I am.”
“The previous eight months have been some of the darkest of my entire life. The emotional turmoil of being transgender and having to face the world has almost ended me on multiple occasions.”
“However, the day I stopped caring about what other people thought, was the day I truly became limitless and allowed my authentic self to come into the light.”
“My loving wife, family, and closest friends have accepted me for who I am. To them, I am forever grateful. Your support along the way means more than you will ever know.”
–
“I don’t expect everyone to agree or understand. It’s not my place to change any of your core beliefs. Just know that the outer shell may change, but the soul remains the same.”

“I know that many of you have questions and, as I have promised, they will all be answered. Tomorrow, on Extra, my interview with Billy Bush airs worldwide. I have included a link in the bio to this interview along with my personal coming out video that explains everything (waiting for Instagram to approve my name change and update the bio – please see my story for the link in the meantime).”
“I promise to always be transparent and truthful with my journey, and to be a light to those that are in need.”
This is me.
Love always,
Gabbi Alon Tuft
Tuft’s professional wrestling career spanned from 2007 to 2014, boasting appearances at Smackdown, Raw and Wrestlemania.
She created a fitness company called Body Spartan with wife Priscilla after retiring. The couple share a 9-year-old daughter named Mia 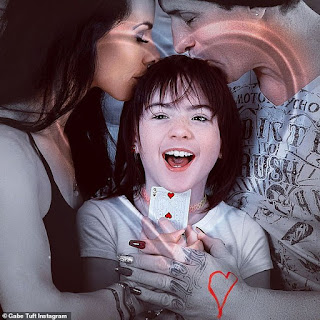