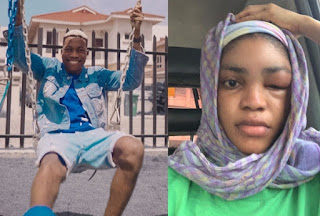 Nigerian singer, Sanni Wasiu, popularly known as Lil frosh, has been remanded at the Ikoyi Correctional Centre till March 9, 2021 over the alleged assault on his girlfriend, Okeoghene Iyomaterie.
Recall that in October 2020, the singer who was at the time signed under
Davido’s record label, DMW records, was called out for subjecting his woman, Okeoghene, to physical and verbal assault while they were dating. Okeoghene in a post shared on her Instagram page, said she had been in a relationship with the musician since January 2020 and that anytime they had a disagreement, he would violently attack her, leaving her with serious bodily injuries.
“He consistently slapped me on the face, kicking, pushing me on other sensitive parts. The recent attack happened in September 2020, when he attacked me and rained blow on my head with bruises on my face. I partially lost my sight and had sleepless nights. He repeatedly boasted that since he is a well-known musician he is untouchable.”
A suit against Lilfrosh was filed before the Lagos state Magistrate court in Yaba with the help of the International Association Of Women Lawyers, Lagos State branch.
At the hearing on Tuesday, February 9, the Magistrate, Adeola Olatunbosun, adjourned the case till March 9, 2021 and ordered that he be remanded at the Ikoyi Correctional Center.