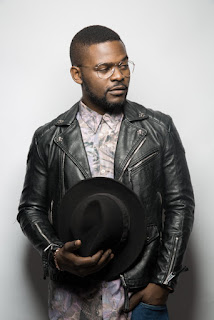 Rapper Falz has reacted to the arrest of popular Instagram comedian, Mr Macaroni and many other #OccupyLekkiTollGate protesters by the police.
In an Instagram post he shared, the singer stated that the arrest of the protesters showed the
Nigerian government is not concerned with upholding the country’s democracy or the Rule of Law.
Falz said that the show of force by the police was meant to make the protesters fear for their lives. He added that while there is nothing to lose at this point, the Nigerian government should be ready for the consequences of these actions.
He wrote;
@mrmacaroni1 and a number of other innocent Nigerians have just been arrested at the Lekki Toll Gate for exercising their fundamental human right to protest.
The Nigerian government has shown by this senseless act that it is not concerned with upholding our democracy or the Rule of Law.
They are basically showing that they are not interested in serving justice as regards the 20th of October incident.
This show of force is supposed to make us fear for our lives, but the life we dey live no kuku get meaning before.
Absolutely nothing to lose at this point. They better be ready for the consequences of these actions. 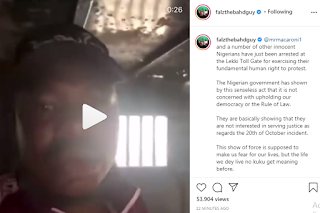