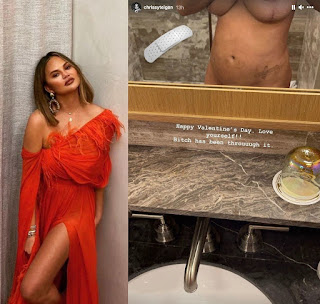 Chrissy Teigen, 35, stripped off to show the extent of her scarred body on her social media.
The model who is married to singer John Legend has been open about her personal struggles with endometriosis and her battle with her body. 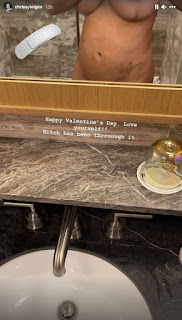 Posing nude in the mirror at home, the mum-of-two showed how her body is recovering from an operation she had on February 4 for endometriosis.
Chrissy’s condition means that she has tissue similar to the lining of the womb growing in other places, as well as facing other struggles with her periods and risks to pregnancy.
Chrissy, who recently spoke about her struggles with the pain after her operation, showed how she’s covered in plasters, her recent surgery scars, as well as the scars under her breasts from her breast reduction last year