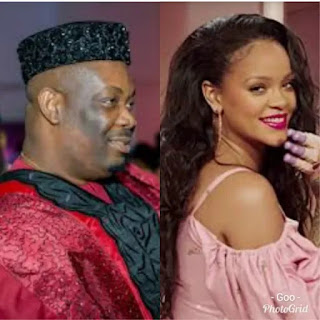 Having a crush on someone is simply having an unrequited love or infatuation for a person and most times this love is not reciprocated because the other party is not aware of the love, Having a crush is almost normal, people crush on their favorite celebrity both home and abroad, when this crush is nursed for a while it turns to obsession.

Don jazzy is a music legend, the young guy has been in the music industry for over 10 years and he has made a name for himself as an artiste and producer, also he has a record label where he helps young Nigerians in the industry. Over the years he has been a die-hard fan of Rihanna who is a foreign music artiste, Rihanna has equally made a name in the music industry. Don jazzy has always professed his love for Rihanna and how much he crushes on her. On Instagram he made it known that if he gets married his wife will have to pray for Rihanna to do well in her career to guarantee a sweet night, he made this known on realwarri pikin’s comment section after the famous comedian made a post saying that Chelsea’s victory made her night sweet with her husband. Don Jazzy is close to 40 years and he said, if I marry not when I marry, does it mean that the music legend does not yet have plans of getting married? well, it seems so but let’s keep our fingers crossed.

Some people reacted to his statement Don Jazzy is an adult so he knows what is best for him.