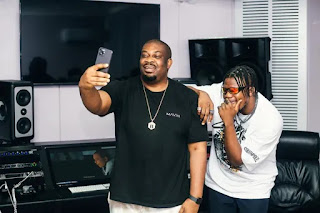 On Friday 26th February, 2021, Mavin Records young superstar, Rema dropped a single titled “Bounce”. The song has effortlessly gotten the expensive attention of Nigerians. In fact, it has engendered the #BounceChallenge which is now a trend on social media platforms, especially Twitter.

Rema is known with his unique sound and melody. Although it is not the ‘usual’ afro jam style, Rema has stayed true to his guts and music lovers in the country adores his sound.

Dope producer and boss at Mavin Records, Don Jazzy took to Twitter to make some statements about the young talent in his team/label.

Don Jazzy: “Rema’s confidence in trying something new is second to none. He knows his melodies are weird and sick but he will rather do those than do the regular.”

Rema’s new hit track, “Bounce” was produced by Don Jazzy and a lot of people have been talking about how creative and crazy that beat is. Don Baba J also Twitter about the beat.

“To match Rema’s hunger for weird vibes, I had to give him a beat so beasty that doesn’t sound like anyone out there. If at all, it would sound like young Don. What do you think of the beat?” – Don Jazzy.