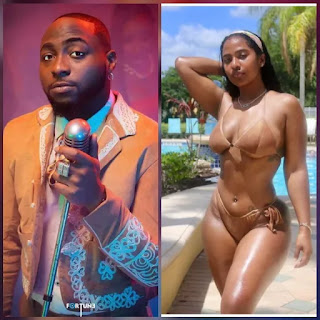 I don’t know if it’s a misconception or it’s true yesterday, photos of Davido Elegantly working in an unknown street that is disclosed not to be Nigeria or Africa with a beautiful young lady that was later disclosed to be Myayafaii, the young Ma alleged ex-girlfriend.

According to a reliable source, it is said that the young man and this beautiful lady have been dating for a long but we are yet the know as both love birds are yet to open up. In the other news, some Nigerians have stormed the young ladies’ Instagram account to make the young lady known that they already aware that she is dating their musician, some find it annoying and blasted her for snatching davido and Chioma.

According to gistreel.com who opened up that Chioma has broken down in tears after hearing and seeing what was happening.

Flashback to Chioma birthday where he surprised her with a car and assurance 2020 that was back in 2019, after the birthday celebration, David dedicated a song to this beautiful Chioma, and everyone was wowed by how the musician poses with her and make everyone know that he is dating her and proud of her, since then we have been waiting for marriage. David Adedeji Adeleke, other wise known by his stage name Davido, is a Nigerian singer, record label owner, and songwriter, He is one of the enormous and most noteworthy artists in the world.

Chioma Roland from Imo state and Davido has been dating for long, davido has engaged her and they are already blessed with a son before this whole rumour started again.

Last 3days, it was also rumoured that his alleged 4th baby mama flaunted their son on social media and the talented young singer has flew the baby abroad for DNA to confirm if the baby is his child.

So if the singer and Myayafaii dating rumor is true, that means there is possibility of her adding up to his baby mamas, making it the 5th baby mama.
Who is myayafaii?

We don’t really know much about her aside from being a beautiful model and influencer who was said to beyoung Ma the female musician ex.

Let’s wait and see what this whole thing would lead to.