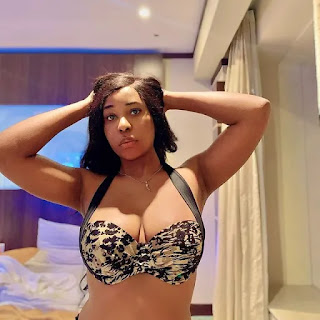 Nkechi Blessing Sunday is a Nollywood actress, filmmaker, and producer, who is best known for acting in Yoruba movies. She is also an entrepreneur, a brand influencer.

.Nkechi is an igbo lady from Abia state but speaks Yoruba language fluently. Nkechi Blessing started acting in 2008 but, became popular after the featured in the movie “Omoge Lekki”. And ever since then She has featured in several Nollywood movies,s ome of the movies include Omoge Alakada Reloaded, Fiditi, Aruga, etc.

Nkechi is one of the beautiful, endowed, fair- skinned complexion Nollywood actress, she’s well known to be flaunting her shape on the gram, and in movies especially in a comical way.

Nkechi Blessing was born on the 14th of February, 1989 to Mr and Mrs Sunday in Surulere, Lagos Nigeria where she grew up with her siblings, Jennifer and her late brother who died in June 2017 at the cold hands of death. Her only surviving sibling is Jennifer Ijeoma Sunday. She was born on 29th September, 1999.

The light-skinned aspiring model and brand influencer is an epitome of beauty just like the actress.

Check out stunning photos of Nkechi Blessing’s sister, that shows she is an epitome of beauty. Drop your compliments for her under the comment section.