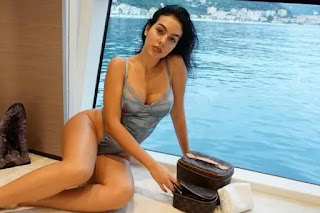 Cristiano Ronaldo finally spoke yesterday since their disastrous early exit in the Champions League with a post on his Instagram the Portuguese International said a lot of things about not giving up even though there are set back at times in life. In his post, Cristiano Ronaldo talked about how history can never be deleted and the history of football, he also went further to say that the most important thing is not the number of falls a person encounters in life but the numbers of times, and how strong or fast the person keep getting up and doing better things than before. After the early exit in the Champions League, there has been a lot of criticism from fans, managers, and even retired legends of the beautiful game of football. There were even rumors of him leaving Juventus after his contract expires in the summer of 2022. Even with all these critics, Cristiano Ronaldo still has the mind of a Champions that he is. After Cristiano Ronaldo’s post yesterday, his girlfriend and mother of his kids Georgina Rodriguez who has always supported him through his up and down in life took to her Instagram story just a few hours ago to show her supports for the GOAT. She edited the photo that Cristiano Ronaldo posted yesterday and tag a name to the post. Here is the photo that she edited below.

Georgina Rodriguez called Cristiano Ronaldo Zeus. Who is Zeus? According to Wikipedia, Zeus is the sky and thunder god in ancient Greek religion, who rules as king of the gods of Mount Olympus. His name is cognate with the first element of his Roman equivalent Jupiter.