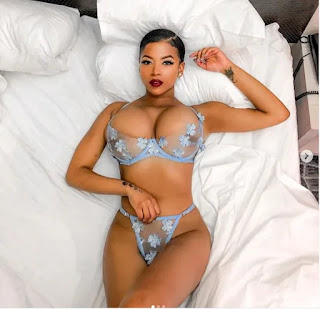 The Boob Movement Founder, Abbey Zeus has come out to reveal how she became spiritual.

She recently had her say on Instagram, and Nigerians have been reacting.

According to her, she drew closer to God after his intervention when she was about to give birth many years ago, adding that her heavenly Father made her deliver at such a young age to teach her a lesson.

Zeus added that she was actually wide awake when God miraculously cut her open and took her baby out of her stomach.

Her words, “I was awake while they cut me open and took the baby out of my stomach and I believe that was God’s way of pulling me out of a certain situation that I was in in my life, to just show me what I’m capable of, to just show me that, ‘listen here, you don’t have to be doing all this to impress whoever”

“He didn’t put me through all this at the tender young age of 21 to punish me.”