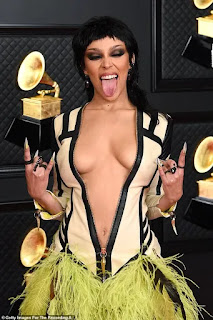 She may be up for Best New Artist at music‘s biggest night this weekend, but she’s already a pro at causing a major stir.

Doja Cat wore a bold and attention-getting look on Sunday, when she strutted the Grammy Awards red carpet in a super-revealing Roberto Cavalli gown at the LA Convention Center in Los Angeles, California.

The Say So hitmaker, 25, let it all hang out in the statement garment, which featured a long-sleeve cream leather top portion that was unzipped all the way down below her belly button.

The feathery skirt featured a high slit on one side, and a lavish train in the back.

On her feet, the star wore open-toed footwear that echoed the top portion of her gown.