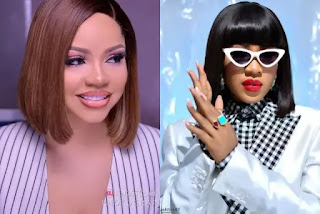 Some social media users have mocked BBNaija ex-housemate, Nengi for not getting an invite to Erica’s birthday party.

This comes after a video of Nengi attending a birthday party of her friend instead of Erica’s, surfaced on Instagram.

Kemi Filani recalls that the Star Girl threw a lavish party at the Eko hotels and some of her colleagues joined to celebrate with her except Nengi, Laycon, Ozo and a few others.

According to social media users, Nengi did not get an invite to Erica’s birthday and she is obviously pained because of that. Hence the reason why she is sharing videos of herself at another party to pretend she is not hurt.

Watch the video below

See some social media reactions below;

@flenzy8 wrote “She is just pretending she is dying inside”

@suasanpeters89 wrote “Who cares Today is Erica’s birthday any other post can be put on hold.”

@alex_anda92 wrote “She doesn’t seem to be happy though, probably forming” @ itz__natasha_ wrote “give her pain killer”

@symply_michi wrote “Jealousy written all over her face”