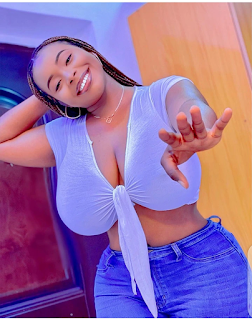 Social media star and internet sensation; Richie Demorest, whose real name is Rich Elijah, is an actress from Akwa Ibom State. Her native name is Inyeneobong. She’s the only child of her parents. Richie Damorest grew up with her grandmother in Aba. She lives presently in Port Harcourt, Rivers State. She was once a student in a university in Port-Harcourt and eventually became an actress. She started her acting career after graduating from school. Richie has an official Instagram account with the name richie_demorest and she has over 244k followers. she recently shared an amazing photo that got everyone’s attention. The Time frame of the photos she uploaded was not up to 5hours, but already has more than 5896 love emojis and more than 258 comments. This is a big one for her.

She shared the photos with the caption ” Off guard but on point. Would say something catchy, but I already got your ATTENTION…” she knew her photo would get people’s attention before sharing it. It actually did.

see the photos below; See some screenshot of the photo and reactions