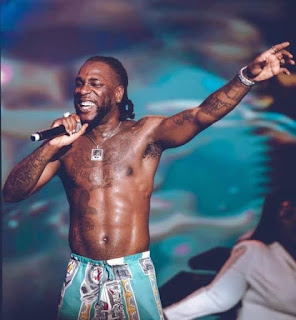 Burna Boy took to Twitter to let a few things off his chest.

The singer, who won his first Grammy on Sunday night, March 14, for the Best Global Music Album, revealed that he did it on his own and his kids will beat their chest some day and say, ‘Daddy did it on his own.’

He also said he’ll never forget how people prayed for him not to win.

He tweeted: ‘My kids will confidently beat their chest and say “Daddy did it on his OWN, We can do it on our own”.’

He added: ‘When you KNOW yourself. NOBODY can tell you about yourself. KNOW YOURSELVES and never go against yourself.’

He continued: ‘GOD is most definitely NOT A MAN. I will never forget how so many of you prayed that I don’t win. too dumb to understand that you also win if I win. No worry This is just the beginning. God is Great.’ 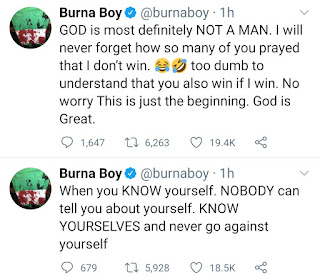