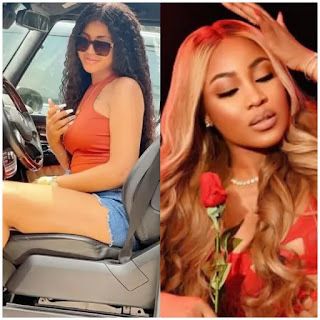 Ngozi Erica Nlewedim is one of the beautiful female housemate in the season 5 Bb naija popular tv show. She was popularly known as Erica and was loved by many people while in the house. Erica was an actress before she came for the big broda show. She could be defined as a woman with much energy. Her beauty could be seen in most of the pictures she shared on her social media page. Being an actress, there are lots Erica still have to show to the world. One thing anyone could love about the young actress and former Big Broda housemate is her smiles. Anyone could easily fall in love with the way she smiles. After the end of the popular Tv show, Erica has taken her time to diversify her talents in many other ways. She always take to her social media to show her fans how beautiful and energetic she is still looking after the television show. She is about 26 years old and filled with much energy. ReginaDaniels is not a household name either when it comes to Nollywood industry. She joined the industry at a very tender age and has grown to lady no one knew she would become abenatio. Regina Daniels is about 20 years and anyone could fall in love with the pretty woman she has become. She also take to her social media page to show off her pictures. She is happily married with a son and this is known with her beautiful pictures she shared on her social media page. Beauty they say lies in the eyes of the beholder. This two ladies are quite pretty and unique in their ways and looking at both of them, there is no other pair good to be compared like them. When given an opportunity, who do you think that is more beautiful between the two pretty ladies.