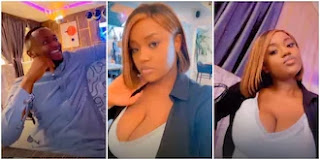 Just recently, the two were spotted spending time together for what seemed like a food date.

Chioma took to her Instagram story with clips showing both of them at the restaurant they visited.

One of the clips captured a seemingly shy Ubi noting that he really needs money.

Another clip captured the two waiting for their meal to arrive. They were also joined by a third party.

Check out screenshots as seen on Chioma’s page below: Just a few weeks ago, Chioma joined many on social media who took out time to celebrate the talent manager on the occasion of his birthday ceremony.

Chioma thanked Ubi for everything he does for her while tagging him a ‘trouble maker’.

In her words:
“Happy birthday to the best manager and my dear friend @ubifranklintriplemg Thank you for everything you do for me, love you always! Trouble maker.”

Chioma was joined by some friends and they all made moves to Wizkid’s song, Essence, off the Made in Lagos (MIL) album.

Some fans who reacted bashed the mother of one while others supported her and noted that she should be able to listen and dance to any song she so desires.