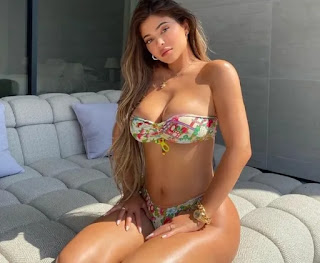 On Instagram, there are less than 7 people with over 200 million followers, and one of them is a 23-year-old lady. She is a member of a famous American family with popular individuals. Her name is Kylie Jenner, a model who is also a step sister to the popular Kim Kardashian, and daughter to one-time Olympic gold medalist Bruce Jenner. Kylie currently has 222 million followers on Instagram, making her one of the most followed. Kylie Jenner has been an inspiration to a lot of young entrepreneurs because of her achievements at a young age. According to Wikipedia, the model is worth $700 million. She is also a mother to one, and she had her child for popular American artist Travis Scott. The 23-year-old model has a cosmetics business called “Kyliecosmetics” which ranges from lipstick to skin care products. Her page “Kyliecosmetics” has over 20 million followers on Instagram. Her beauty is also an addition to her fame as some people have dubbed her one the the most beautiful among the Kardashian sisters who are also rich and famous. Her blood sister is known as kendall Jenner, who has been listed among the highest paid models in America. They both have an App called KENDALL&KYLIE which once reached number one on the iTunes app store.

The young mother still slays, and she is known to share lots of beautiful photos of herself on her social media pages. Check out some lovely photos of Kylie below. Kylie and her famous sisters

What can you say about this young Business woman?