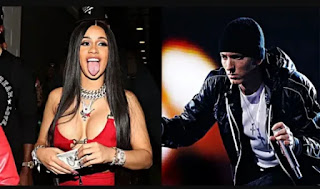 Recently, The internet exploded over the rumors about Eminem turning down a request from Cardi B to feature him on one of her songs.

Now, the news spread very fast because everyone knows Eminem to be a very controversial rapper who sometimes spark things up and can diss anyone at anytime. This was the rumor that had people talking, the part where Eminem allegedly said “she doesn’t care about the culture or her craft” was the point people used to call out the rapper.

But Cardi B has cleared up the air with a tweet, where she denies asking or requesting for a feature from Eminem.

Now she we have heard from the Horse’s mouth that nothing as such ever happened.

But as a music lover, would you love to see a collab from the two artists?