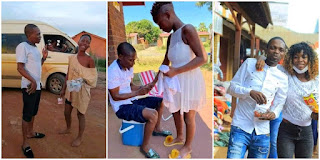 – He was said to have taken her in, provided her shelter and food

– In the course of her sojourn with him, they fell in love and will be walking down the aisle in May

Love, it is said, is like war, easy to begin but difficult to stop, this is the case of two lovebirds set to be walking down the aisle later in May.

The story of the unidentified South African lovebirds, according to Newzandar, has it that the man had accosted the lady on the street.

Man falls in love with homeles lady he had housed, set to marry her Photo Credit: Correctng

The homeless lady begged him for N1200 to help her get food.

Moved by her situation, the man had taken her to his abode, accommodated, fed her and got her new clothes.

One thing led to another while they stayed together and the man fell head over heels in love for her.

He proposed to which she consented and the lovebirds went in search of their relatives to begin marriage preparations.

The lovers, Correctng reports, will get married on Monday, March 29, 2021. Their love story is also a testament that love is truly blind to circumstances and conditions.

Meanwhile, Music-wap.com earlier reported that a man had set things in place to get married to a lady he met on Twitter.

Making the announcement on Twitter, the man Arinze who is a pilot said that the person who is going to serve as his best man is also someone who he became friends with on the platform.

According to Arinze, Twitter is not just an app, but “whatever you make of it”. His tweet has gathered over 11,000 likes as at the time of writing this report.

Nigerians on Twitter gushed over their beautiful photos and marvelled at the story.

Many wondered if they were using the same Twitter app the man uses.