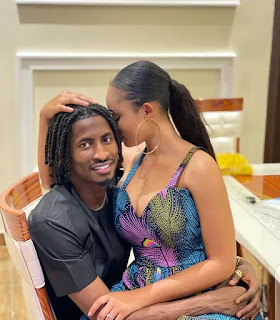 The Nigerian international has been dating the pretty actress for a while, and he proposed to her in December 2020, before they eventually get married in March 2021.

Peter Olayinka who was on the standby list of coach Gernot Rohr decided to use the international break as the right avenue for him to get married to the love of his life, the duo have been finally joined together in a low-key gathering in Lagos. Peter Olayinka who has been superb for Jindrich Trpisovsky’s Slavia Prague since the beginning of the season was given a permission by his club in their last game last weekend, having starred for the club in the UEFA Europa League against Steven Gerrard led Glasgow Rangers where he was able to scored a goal in their 2-0 victory, to help the Czech Republic League Champions to book their spot in the quarter final of the UEFA Europa League. Peter posted on his verified Instagram handle on Friday evening that;

“First step to forever with you bestie ❤️❤️❤️ @ Yetunde Barnabas.” Fans across the globe have now started reacting by congratulating them. Congratulations to Peter Olayinka and Yetunde Barnabas, may the Lord Almighty Bless your new home.