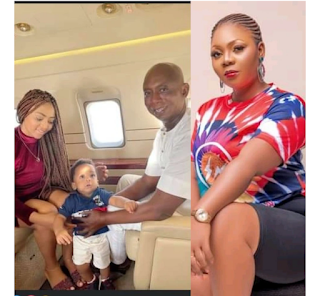 One of Regina Daniels’ strong fans have again, taken side with her idol’s decision to choose Senator Ned Nwoko as her husband instead of other options available to her some years ago when Prince Nwoko came into her life.

Regina Daniels is arguably the youngest celebrities to have getting married in the country. Regina who was 18 years of age before getting married to her billionaire husband is still being criticized by some people who believe her decision to marry Prince Ned Nwoko was a wrong one.

To these persons, a younger man, perhaps someone like Regina’s ex-boyfriend, Somadina Adinma should have been chosen by the actress as her husband instead of the wealthy politician. Many of them based their argument on the ground that, Senator Nwoko is no longer a young man.

On and on, these critics seem not to be backing down in their arguments. Due to this unusual criticism-strength on the sides of these critics, others who truly love and cherish Regina’s choice of husband always come to her rescue by attacking those attacking the actress. This type of Regina’s fans are always around whenever the critics surfaces with their attacking words.

A while ago, the same scenario was witnessed on Regina’s Facebook page where she posted beautiful photos of her loving husband and son, Murni. Regina and her family were seen very happy in the photos.

Despite the happy mode noticed on the photos, a lot of critics were at hands to remind the actress about how she should have opted for a younger person as husband. See the beautiful photos of the actress and the family members below: As stated above, a fan known as Jennifer did everything possible in her own comment to justified Regina’s decision in opting for Senator Ned Nwoko Instead of a younger husband. According to the fan, Regina Daniels did nothing wrong in choosing the politician as her husband.

Steven Jennifer in her comment says, most young men are not capable of handling ladies hearts. The inability of some young guys to remain with one partner is the major reason why she is supporting Regina’s choice in the person of Senator Nwoko.

Jennifer who believes that, age is just a digit number says, the most important thing in marriage is love and peace of mind. To her, if those ingredients are present in any marriage, such union is good to go. Many of us here will not allow such opportunity to sleep off of our hands, she cautioned the actress. See the comment and a few others below: What do you think are the reasons why some people are so pained about the decision Regina Daniels made some years ago concerning her private life? The fact that, she is not regretting her decision in any way as Ned’s wife shouldn’t be enough reason for everyone to back off the needless criticisms?