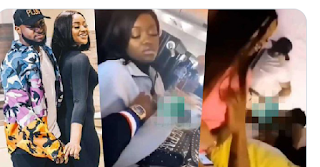 Amid the saga of Davido disrespecting his fiancee by k*ss*ng another woman, old videos of the couple resurface as O.B.O is seen fondling Chioma Rowland’s chest.

In a throwback video making rounds online, Davido is seen touching his fiancee’s chest while on a commercial aircraft; and in another in the presence of his bodyguard.

It would be recalled that it was during the period the celebrity Chef gave birth to their first and only son. This however trigger fans of how insensitive Davido is of folding his fiancee and taping it while forgetting that she was a new mum and her chest would definitely still be aching.

Watch the video below …