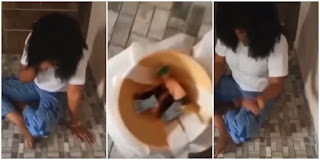 – A video of a lady exposing her best friend identified as Jennifer, after catching her with some diabolic items including her photo

– In the video, the heartbroken lady confronts her friend for putting her picture in a calabash

– She questioned why the best friend would do such a thing, adding that they have been best friends since 2003

– Several internet users have reacted to the trending video

Nigerians on social media have reacted to a now-viral video that captures the moment a heartbroken lady confronted her best friend for putting her picture inside a calabash.

In the video, the lady behind the camera can be heard questioning her friend, Jennifer, who is seen sitting on the floor with her face in her palms.

The lady who revealed that they have been friends since 2003, expressed her shock and disappointment at her friend who remained on the floor, speechless.

Watch the video below:👇

The video which has since gone viral had several Nigerians reacting in shock and anger.

Below are some comments:

“Whether this is staged or real…you just have to be careful with friends. NOT EVERYONE WISH YOU WELL. Some don’t know their way to Babalawo place but you see the thought in their mind about you, that thought will kill you, resurrect you and kill you again.”

“Be careful! Don’t trust people so easily.. keeps friends at a distance.”

“She’s quite calm. I mean she’s too calm for someone who just found out this kind of sh*t.”

“Na why I comot hand for friendship.” 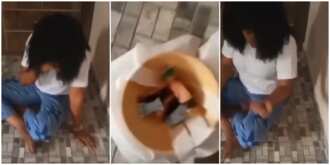 Nigerians have reacted to the video. Photo credit: @ijeomadaisy

“What if the friend (Jennifer)did it to protect her but was too afraid to tell her because of this exact reaction? :”

“Is always best friends… that’s why I don’t any friends talk more of best friend. This is real definition of FAKE LOVE.”

“This is very bad, people have betrayed a lot of trust, God forbid.”

“Fear humans , God will keep protecting us from evil.”

In 2018, a Nigerian lady shared a very pathetic story of how a friend she squatted in her house tried to ruin her marriage.

Rachael Daniel, the Nigerian lady posted a picture of her friend on Facebook as she warned people to beware of her. She said the woman is evil, as she narrated her bitter experience in the hands of her cruel friend.