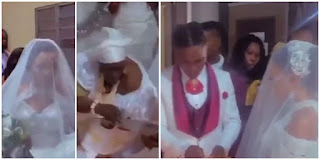 – A video of a couple getting married at a shrine in Abraka, Delta state, had gone viral

– According to a report, the lovebirds wedded at the shrine of the bride’s mother

– In the video, the couple is seen being joined as husband and white by a priestess

Talk about something bold and different, and a video currently trending on social media of a couple’s wedding ceremony in Abraka, Delta state, comes to mind.

In the video shared on Instagram by @isntablog9ja, the bride is seen dressed in her wedding gown as she proceeds to her mother’s shrine.

In another part of the clip, she is seen with her groom receiving blessings from the priestess who then proceeds to pray over the rings, sprinkling a powdery substance over the pieces of jewellery.

The video which has since gone viral had Nigerians reacting with mixed feelings about the wedding. While some questioned her need to dress in a white wedding gown, others believed the marriage will not fall apart.

“I pity any girl wey wan be his side chick or bestie, Na from shrine you go chop spiritual slap “

“Slavery mentality. If you want to go full traditional, do that. What is white wedding in traditional Africa if not adalu!”

“Respect their belief but I don’t want to see them I church tomorrow asking for deliverance.” 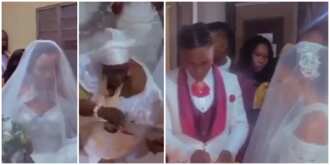 “Normalise embracing your culture not white mans culture bless them”

“My type of wedding you leave me u run mad”

“Lol, congrats to them but they should have left the kids(flower girls) out and also worn a nattive attire.”

The young man has now spoken in a recent interview with BBC Pidgin on what informed his decision and how he is enjoying the union.