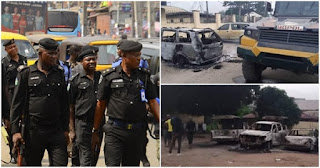 – A retired senior police officer, Ambrose Aisabor, has raised concerns over insecurity in the southeast

Aisabor told Daily Trust that the group aims to achieve the Biafra Republic by engaging in war with the Nigerian government. 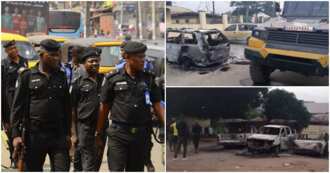 Police and military formations in the southeast have come under attacks from gunmen. Photo: Photo by Olukayode Jaiyeola, @NKUMEH/Twitter

“If you look at it, they are not attacking ordinary people. They are attacking the police, the army, and the air force that is what they are doing.

The former police officer said the failure of intelligence on the part of the security agencies has enabled the group to carry out attacks unchecked.

He said improved intelligence was needed to stop future attacks by the secessionist group.

In another news, President Muhammadu Buhari has ordered relevant agencies of the federal government to end what he called anarchy in Imo state.

A presidential spokesman, Garba Shehu, said the president condemned the insurgent attack that took place on the police command Headquarters and the correctional facility in Owerri, Imo state.

Buhari also ordered security and intelligence agencies in the state and the geo-political zone to fully mobilise and go after the terrorists, apprehend them and get them punished under the full weight of the law.

Meanwhile, a presidential aide, Lauretta Onochie, has argued that there will never be a Republic of Biafra again.

The senior special assistant on social media to the president in a tweet on Monday, April 5, said the Republic of Biafra died the day secessionist forces surrendered to the then head of state, Yakubu Gowon.

Onochie shared a video showing the then Head of State receiving the then Biafran Vice President, Major General Philip Effiong, who facilitated the surrender of the Biafran State to Nigeria in 1970.