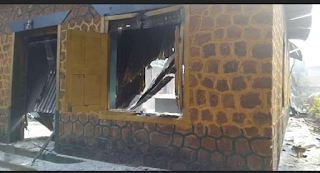 The Punch is reporting that gunmen on Tuesday, April 6 burnt down the Ehime Mbano local government area divisional police headquarters in Imo state.

According to the report, the attack came hours after Vice President Yemi Osinbajo, the just sacked Inspector-General of Police, Muhammed Adamu, and other government functionaries visited the state.

On arrival, the gunmen reportedly freed all the suspects in detention before setting the facility ablaze without any resistance from policemen.