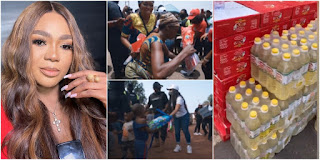 – The actress visited the communities with foodstuff, school bags, Shozies, among other goodies

– Rachael revealed that 200 widows benefitted from her kind gesture

Nollywood actress Rachael Okonkwo has taken to her official Instagram page to share how she celebrated Easter.

The actress visited different communities in Enugu state where she distributed various gifts to residents. 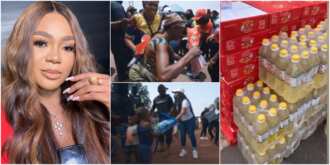 In one of the videos she shared online, Rachael was spotted with her team members with a truck of gifts.

Children received school bags, shoes, bicycles among other things. One could see the joy on the faces of the kids as they collected their gifts.

Men were also not left behind as they were given beautiful sneakers.

In the video, bags of food, bags of salt, cartons of tomato paste, among other foodstuff were spotted.

According to the actress, 200 widows benefitted from the foodstuff. A part of the video showed the moment a widow was dancing in excitement as she received her own package.