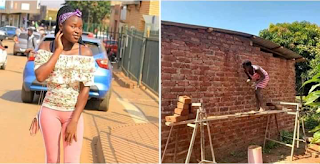 – Many have described her as a source of inspiration, with others hailing her

A lady has been hailed by many for singlehandedly doing what is usually thought to be done by a group of men.

The yet-to-be-identified woman put her bricklaying skills to use as she was captured building and plastering her own house all by herself. 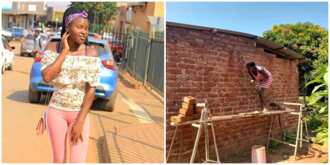 Photos of lady building and plastering her house herself inspires many on social media Photo Credit: (@Ndi_Muvenda_)

Bringing the lady’s deed to light on Twitter @Ndi_Muvenda_ wrote:

Many tweeps celebrated her for what they described as leadership qualities, others thought it was amazing.

She didn’t wait for anyone to help her build a home she did it all by herself only plastering left ❤️🔥
~She’s From Makonde ~ pic.twitter.com/7sxXaqG3YS

“Most women they won’t do that keep it up mogal.”

“Will move in so i can plaster the house her number pls.”

In a heartwarming post, Dine Okon explained how she and her daughter moved from home to home without having a place of their own to settle down in. She also explains how proud she is of herself.

“After so many years of moving up and down without a home, today me and my daughter we have a place we call home, even though this year was big roller coaster this is my achievement and very proud of myself, that’s why #imstaying, thank God.”