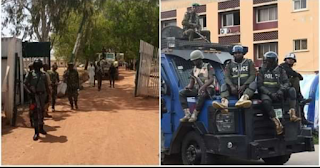 – The whereabouts of an Imo monarch, Eze Charles Iroegbu, is currently unknown

– Cases of kidnappings are becoming a regular occurrence in Nigeria

Eze Charles Iroegbu, the traditional ruler of Umueze Nguru in the Aboh Mbaise Local Government Area of Imo state has reportedly been kidnapped by gunmen.

The Punch reported that the monarch was kidnapped along with some cabinet chiefs of the kingdom when returning from a traditional wedding within the state. 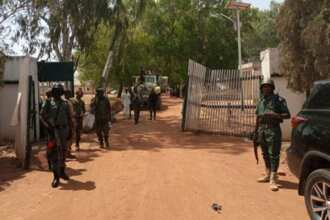 Nigerian soldiers and police officers stand at the entrance of the Federal College of Forestry Mechanisation in Mando, Kaduna state after a kidnap gang stormed the school. Photo by Bosan Yakusak

The publication stated that the gunmen intercepted and diverted the three vehicles that were conveying Eze Charles Iroegbu, and his cabinet chiefs.

A source said the kidnapping of the respected traditional ruler has caused fear and panic in the community.

According to the source said:

“His Highness and his cabinet chiefs were on the back from a traditional wedding ceremony in Mbano when they were kidnapped. This is unbelievable and there is fear and panic everywhere.”

A source told The Nation that the incident occurred at the popular Seven and Half junction in the Obowo area of the state.

When contacted, the spokesperson for the Imo police command, Orlando Ikeokwu, could not confirm the abduction.

Meanwhile, Governor Nasir El-Rufai of Kaduna has said that the state government would soon secure the freedom of the abducted students of the Federal College of Forestry Mechanisation, Afaka in the Igabi local government area of the state.

Channels TV reported that El-Rufai stated this on Wednesday, April 7, while receiving five of the 39 students abducted by bandits who invaded the school on March 11.

The students were reportedly reunited with their parents after the troops rescued them on Monday, April 5.

In another news, Daily Trust has reported that suspected gunmen in the early hours of Wednesday, April 7, killed three people, including two policemen and foreigners in the Ukum local government area of Benue state.

Legit.ng gathered that the victims were killed when the armed men attacked Symmetry Trading Company located in Ukum area of the state where they abducted two foreigners.

According to the report, the foreigners are Chinese nationals working as engineers in the company.