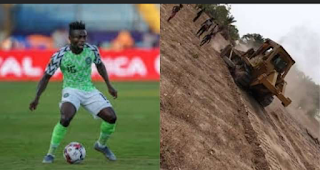 – Simon has been impressive for the Super Eagles over the years

People of Obagaji Agatu community in Benue state are currently in joyous momentum as their son Moses Simon who is a Super Eagles player has decided to construct the roads and drainage that lead to the town.

This is an awesome development coming from the 25-year-old winger who is currently playing in the French League with FC Nantes.

Moses’ father hails from Obagaji in Agatu community and the Super Eagles star has been showing love to the people of the town over the years.

Last year, Moses Simon ended the community’s problems of getting portable waters by constructing boreholes for them to be using according to the report by Owngoal

Also in his efforts to ease the pressure on the boreholes, Moses Simon dug many wells in the community so as to make sure that there are enough means of getting water by the people.

There are also reports that Moses Simon is already planning to build hospital for his community.

Meanwhile, Moses Simon and his club in France Nantes are currently not doing well in the topflight and they may be relegated at the end of the season.

With 31 games played so far, Nantes are currently occupying 19th position on the table with 28 points.

Since 2015 that Moses Simon has been playing for the Super Eagles, the winger has featured in 33 games scoring five goals for the three-time African champions. 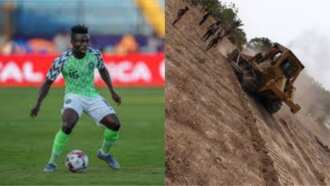 This latest rise by the Super Eagles in the FIFA ranking was as a result of their incredible wins over Lesotho and Benin in their last two games in March.

Gernot Rohr and his men were so superb in Porto Novo beating Benin 1-0, while they defeated visiting Lesotho 3-0 at the Teslim Balogun stadium in Lagos.

The two wins helped the Super Eagles to finish their campaign as leaders in their group and a ticket for the 2022 African Cup of Nations which will be played in Cameroon.