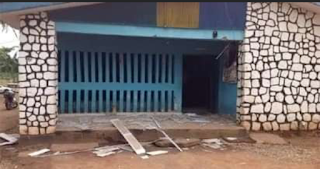 According to the report, the attack has been confirmed by a spokesman of the Cross River state police command, Igri Ewa

Ewa was said to have told journalists in the state capital, Calabar on Monday, April 12 that the attackers, suspected to be cultists, invaded the police station, but assured that investigation has commenced on the issue.

Following the attack, a number of AK-47 guns were reportedly carted away by the gunmen while they also manhandled policemen on duty. 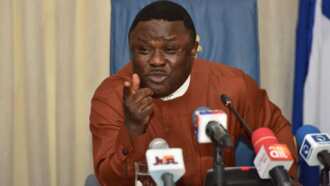 Governor Ben Ayade of Cross River state is yet to officially react to the attack. Photo credit: @crossriverwatch

An eye witness quoted in the report said:

“The gunmen scared away the officers on duty, beat one to stupor, and made away with the AK-47 rifle of the policeman.”

It was learnt that the attack led to the closure of the station indefinitely and officers asked to move to another station at the local government headquarters.

Some Nigerians have been reacting to the latest attack targeted at a police station via social media.

“They’re in the stage of gathering arms.”

“They have moved from Imo state to Cross River now.”

On a popular Nigerian internet forum, Nairaland, a Nigerian with the moniker Big 7 wrote:

“Divide the country… Everyone knows the reason behind all of these incessant attacks. Divide it now to save loads of lives from dropping dead like flies… Guns are in massive circulation. Let’s save people, please.”

“All this madness is getting out of hand and something drastic needs to be done to save lives.”

“This country is finished, gunmen have become an everyday activity.”

“Nigeria is programmed to fail. You cannot continue covering lies for so long and expect it not to expire. Too bad.”

“The Lord will remove violence from our land in Jesus name. Amen.”

Recall that some police operative in Ebonyi on Tuesday, April 6, repelled an attack by gunmen on their station in the state.

One of the assailants was killed in the shootout with the police, while one of the operatives who repelled the attack, was injured and rushed to a hospital for treatment.