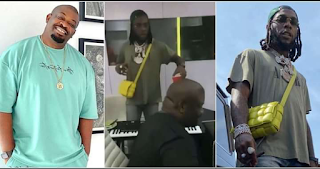 – Don’s dad then described both men as giants, noting that something is cooking

Music mogul Don Jazzy’s father has got Nigerians expectant as he took to his Instagram page to share a video of his son who is a music producer and Burna Boy in the studio.

In the video, Burna Boy was spotted on his feet while Don Jazzy sat on a swivel chair. The music producer soon stood up and told someone to take his place.

Later, Grammy award-winner Burna was seen with earphones as he moved to a song playing from a speaker. In the caption that accompanied the post, Don Jazzy’s father described the musicians as giants.

“When two giants @burnaboygram and Mavin Boss beat King @donjazzy meet up in the studio, don’t ask me what’s cooking. Your guess is as good as mine.”

As expected, Nigerians had something to say about the post.

“Another banger in Rema’s voice.”

“Another Hit is cooking.”

Enebeli shared a throwback photo with JJC and accompanied it with a sweet message in which he described him as a legend without whom Don Jazzy’s success story wouldn’t be complete.

Back in the days before the fame and money, Don Jazzy had signed a contract with JJC 20 years ago. However, they fell out and this led to Don Jazzy’s return to Nigeria.