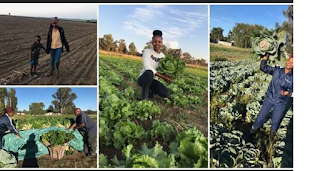 – Presently, she boasts of running two farms and a retinue of staff under her

At a time when many are still job hunting, young Njabulo Mbokane is doing just fine and steadily carving a niche for herself in the farming business.

The South African lady, according to Women Power Africa’s Linkedln post, is a proud owner of two running farmers with 16 persons on her paycheck. 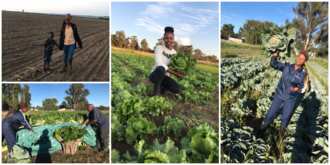 The young female farmer is a source of inspiration to many Photo Credit: @MbokaneNjabulo

Mbokane before venturing into farming was a fish and chips seller as her family couldn’t afford to send her to the university.

The award winner farmer was said to have garnered valuable farming experience during her time as a farmer in a local school vegetable garden.

Mbokane had volunteered to cover the operation costs of reviving the school vegetable garden as well.

She would embark on a venture of leasing five acres of land to grow soya beans that failed.

The mother-of-one eventually succeeded when she partnered with a commercial farmer who made machinery and other necessary inputs available, consequently she took an extra 37 acres.

Now, she supplies South African Breweries (SAB) with yellow maize and has diversified into poultry, vegetables and livestock.

Mbokane was in 2019 recognized by SAB with the award of the Young Emerging Farmer of the Year.

“Keep up the good work.”

In the caption of the post that was made by the young farmer with the handle, @ThandoMagane, she proudly explained that she can do literally everything for herself on the farm and does not really need any help from anyone.

Many impressed social media users took to the comment section commending her for her hard work and refusal to back down in the face of hardship and struggle.