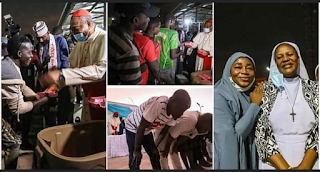 – The former archbishop of Abuja, Cardinal John Onaiyekan, has given out plates of food to hundreds of Muslims as he preached love

Cardinal John Onaiyekan who was also the former archbishop of Abuja on Thursday, April 22, showed great love towards Muslims at the Al-Habibiyah Mosque in Guzape.

Before his arrival, the faithful had gathered to break their evening fast. The priest handed plates of food to almost 2,000 worshippers while preaching peace, Channels TV reports. 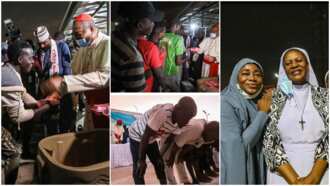 He said that God hates it when people kill each other, stating that the Almighty rather wants everybody to live together in peace and harmony.

At the same occasion, the Chief Imam of the mosque, Fuad Adeyemi, said that the food the clergy gave them contributed greatly to their energy.

“This is not an underground clergy. It shows that we can really live together, that we can be friends, and that we can live in peace.”

The Cardinal also prayed for peace in the country, asking God to give respite to the nation from all the insecurity issues it has been having.

In attendance were other dignitaries like the Plateau state governor, Simon Lalong, and the chairman of NDLEA, Mohammed Buba Marwa.

The governor who revealed that politicians that want to be in power in 2023 are responsible for the state’s problems, vowed to expose those politicising the issues.

Makinde made the disclosure while addressing the congregation at St Peters Anglican Cathedral, Aremo, Ibadan, on the occasion of Easter on Sunday, April 4.