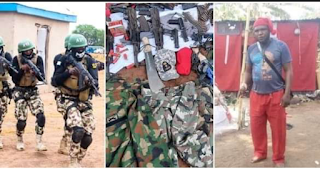 The security forces described their operation against IPOB as a success

More details have emerged about the killing of Ikonson Commander, a leader of the Eastern Security Network (ESN), a militia group linked to the Indigenous Peoples of Biafra (IPOB).

Ikonson was identified as the vice president-designate of IPOB. Security forces said he commanded series of violent attacks on security personnel and formations in the southeast and south-south of the country. 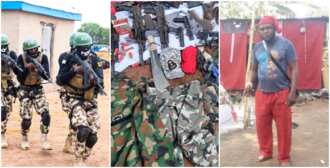 According to the army, the neutralised commander had on several occasions posed for photographs with the fugitive leader of IPOB, Nnamdi Kanu. Photos: @NigAirForce @Austynzogs

According to PR Nigeria, a spokesperson for the Nigerian Army, Brigadier General Mohammed Yerima disclosed in a statement that a combined team of security forces led by troops of the army were involved in the operation that killed the militia leader.

Yerima said troops of the Nigerian Army, Nigerian Police Intelligence Response Team (IRT) and operatives of the Department of State Services (DSS) trails the militants to their hideout in the early hours of Saturday 24 April 2021, following a detailed intelligence report on the location of the terrorists’ camp.

The army stated the intelligence team tracked the IPOB/ESN top leader to his exact location in Awomama village and engaged the terrorists in a gun battle.

‘’On noticing the presence of the joint operations team, IPOB/ESN terrorists brought heavy volume of fire on the raiding team who swiftly responded and overwhelmed them with superior fire power that neutralised Ikonson and six of his top commanders.

‘’Sadly, however, a Second Lieutenant and three IRT operatives paid the supreme price in the fire fight that ensued. The four officers who fought gallantly have already been evacuated to a military facility in Owerri.”

Yerima stated that 3 AK 47 riffles, a Toyota Sienna van belonging to the terrorists, and several other items of value were recovered from the group.

Meanwhile, the Abia state governor, Okezie Ikpeazu, said the IPOB has placed some southeast governors under the death sentence for yet-to-be-disclosed reasons.

The Punch reported that the governor, who made this known, said he is one of those under the IPOB death sentence.

He noted that the issues of marginalisation and inequality raised by the leader of the IPOB, Nnamdi Kanu, are valid.